Pirates vs Cowboys / Bay to Breakers

I spent most of the weekend in SF hangin’ with Nick and Kori. First was the party at the old office of the puzzlepirates crew Saturday night. The theme was pirates vs cowboys; I decided to go cowboy. I spent a good amount of time saturday walking around Cupertino picking up pieces of a costume… nice hat / coat, little american flag to stick in the hat, white t-shirt with GUNS scrawled on the front with a fat sharpie. I also found some kind of faux wicker Miller High Life hat – baseball cap style, very ghetto – that I would have used had the larger cowboy hat become tedious (though it never did). Then I had a serious leather holster that was just big enough to securely hold a bottle of beer; that worked out well. 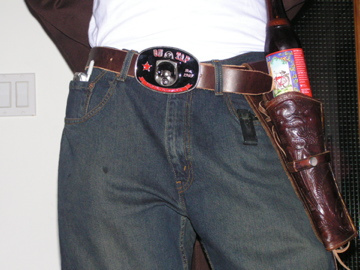 During the travels that day, I happened upon a small children’s toy called “PopUp Pirate”, which included a small plastic pirate lookin’ dude, and a bunch of tiny plastic pirate swords. I used that to make an ornamental necklace of the skulls and swords of pirates I had defeated in duels, ya know. I had what I thought was a very good cowboy gait, some kind of saddle-sore legs-first affair. I discovered that playing cowboy is kinda fun, especially in today’s political climate.

Kori has some photos of all that.

The place was set up nicely, and well primed for a last hurrah what with the no furniture and open bar. There were a couple of big silhouette panels with lights behind them… pretty cool party element, especially with all the interesting costumes. The party itself was a slow start, but got cookin’ pretty well eventually. We ended up leaving fairly early… maybe 1:30 or so. The idea was to rest up, since the next morning was the Bay To Breakers race / parade / moving block party which gets started pretty early.

As we left the party, I saw a most amazing sight. I guess we were right along the race route, and there were tow trucks stretching off into the distance in either direction, towing EVERYTHING. The street was full of tow trucks arriving and departing, the sidewalks were full of people sprinting after their cars. It was a scene. We crashed at Nick’s apartment after a short cab ride.

At about 8 I got up and went outside to chill on the stoop; the apartment was right on the route. It was fast runners for a little while, then loooots of joggers. There were a bunch of people on the corner to the left of us that had been partying all night, who were also pumping music into the street… Their music was good. The people doing the grilling to our right were also pumping music, but their music sucked – mostly because they played the same two songs for about an hour and a half.

I had never seen the Bay To Breakers thing before; it’s definitely a scene. It’s a combination of serious runners, casual runners, people just out to walk, groups who show up with a theme of some sort, and hard-core party people. Lots and lots of kegs were in that parade.

Race / parade pictures from me, and Kori’s set.

It was a real fun time :) As a bonus, I’ve now started looking at the new game from the puzzlepirates people, Bang Howdy. I find it to be a lot of fun; sort of a semi turn-based rts, simple to learn, but I think the strategy can get pretty deep. It’s also the most amazing java anything I’ve ever seen, with really nice OpenGL gameplay to compliment the tons of great 2d artwork for the non-action parts of the game.

On the larger scale, I’m still grinding away in Cupertino. Kinda just doin the routine, trying to get through this project… I signed up to staff WWDC again in August – I’ll be an Enterprise IT Lab llama again this year. Maybe some day I’ll start reading friend’s blogs again; sorry I’m so out of touch.

I like all kinds of food.
View all posts by dre →
This entry was posted in bit bucket and tagged fun, travel. Bookmark the permalink.

One Response to Pirates vs Cowboys / Bay to Breakers